A friend comes to pick up her child from a play-date with our son and she announces excitedly that we are in Dwell. I smile and I say I know! Isn’t it great, we’ve been on Dwell a couple times, which one did you see! And she goes, no, you are in the “100 Houses we Love” Dwell, and you have a big article in it!

So we pick it up. Here’s an excerpt of the editorial:

They only chose TEN full articles, one per year. Thank you Dwell not only for choosing us–what an honor–but also for making us the chosen article for 2008.

One in ten years, ten homes in one hundred. Wow.

And so it is! Now in stands and zinnio, enjoy! 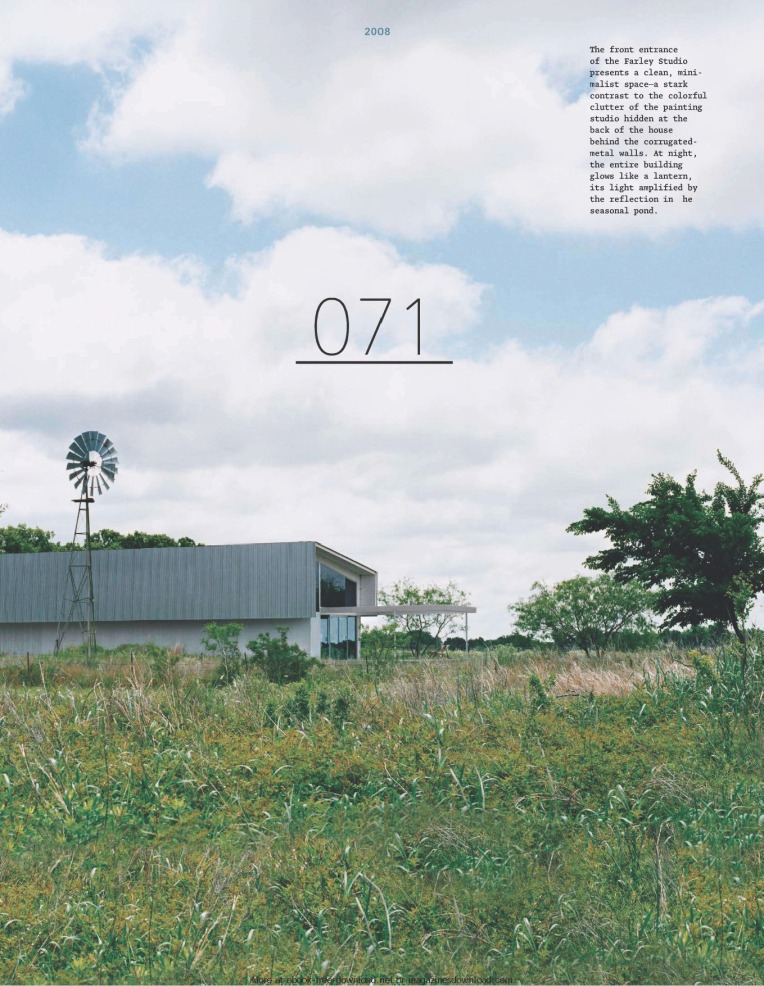 END_OF_DOCUMENT_TOKEN_TO_BE_REPLACED

The American Institute of Austin, Austin chapter is posting some of the award videos they make every year. I’ll post our wins as they become available. This project of ours was the honor award in 2008. Here’s why, according to the judges.

The owner requested that the house have the feel of a “cabin”. A place of solace and repose in the middle of the city.

It also was important to respect the delicate lines and low profile of the existing mid century modern house designed by the late A.D. Stenger, one of Austin’s great modernist architects. From the street, the house looks virtually untouched. It remains a modest presence on the block.

The original house was taken back to the studs, the existing fireplace with its eccentric stone work was saved, and two previous unfortunate, mold infested, additions that made the existing house a black hole were removed.

A master bedroom and bath where added and the interior of the existing house completely remodeled and re-oriented around a long skylight and two interior courtyards. The skylight and courtyards maintain privacy and allow natural light into all parts of the house while providing a connection with the live oaks and changing sky.

Maple, tinted to match the tone of the pine flooring, wraps through out the house becoming cabinets, paneling, and flush doors. Traditional, earthy D’hanis “mocha” brick pavers become the surface in the courtyards.

Update: this project won a citation of Honor at the AIA, Austin 2010 Design Awards.

The program was to provide workspace for a multi-disciplinary creative studio. The location was in the last remaining intact interior of a small completely masonry (interior and exterior) strip center designed and built in the late forties.

New additions are of wood and steel to contrast the existing raw masonry. Everything new is installed so that when removed, the integrity of the raw space is maintained for the future.

Careful allocation of funds and tricks like kerfing the ¾” plywood to provide the “poor man’s curves” where used to meet the extremely low budget of twelve thousand dollars. New materials are formaldehyde free plywood with a tung oil finish, cold rolled steel, and paint.

Update: this project won a Merit Award at the AIA, Austin 2010 Design Awards. 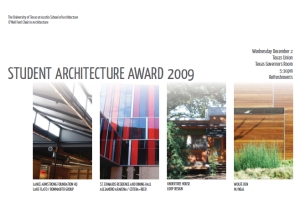 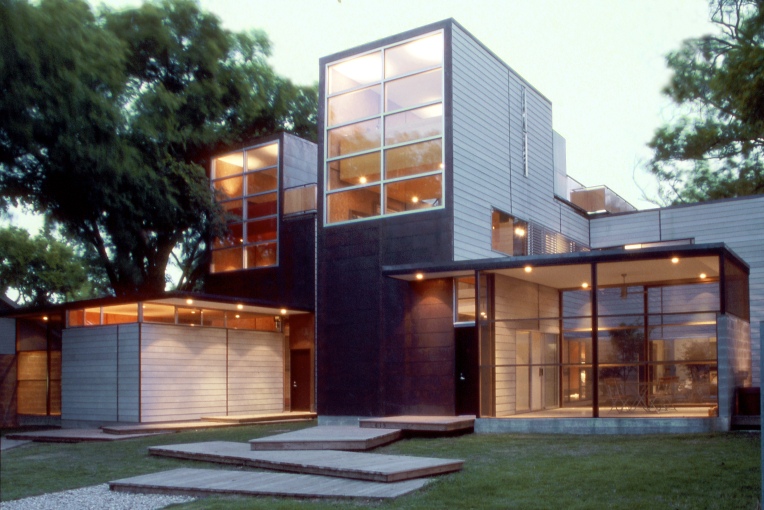 There seems to be a few questions about Twin Peaks on Apartment Therapy. I guess we can answer them here… Yes, the central piece seems to float off the walls. It’s structure is attached to the wall by brackets. Since the houses are not big, it allows for the eye to travel in between and it creates a much “lighter” feeling.

The finish on the center folding piece is a type of catalyzed polyurethane, it’s like a lacquer, though it is NOT technically a lacquer.

Here’re the pics we have and a wonderful article about the house by Kris Krager, a colleague, who wrote the article for an issue of Texas Architect, when the project won a State Award (TSA) I would link to the article but it’s not online anymore!

Like many other American cities, Austin has seen a significant increase in central city development in the past five years. The realization that Austin cannot sustain the continued stretching of its urban infrastructure has led to such initiatives as Smart Growth and Traditional Neighborhood Development. These initiatives have led to relatively low-risk residential development guided primarily by builders erecting traditional housing or “soft-loft” projects priced at the top end of the market.

However, instead of relying solely on the high-end of the economic spectrum, cities such as Austin have the opportunity to deal with – economically, architecturally, and socially – the urban phenomenon of centripetal growth with innovative residential typologies. Moreover, placing suburban houses in quasi-urban environments is essentially irresponsible and results in a lost opportunity for more creative solutions.

With his Twin Peaks project, M.J. Neal, AIA, set out to challenge the unimaginative builder model with a “urban/suburban hybrid.” The problems he faced are neither unique to Austin nor without historical precedent (think of Arabian courtyard houses and urban townhouses): How to design stand-alone single-family residences with the amenities of the suburban home within neighborhoods of increased density, and how to provide residents a comfortable level of isolation on a constrained site while allowing controlled engagement with the public realm?

To successfully address these issues, a building must become an exercise in spatial economy. This Neal accomplished in Twin Peaks with choreographed movement around articulated service masses. The two buildings are essentially vertical tubes with which Neal has taken an additive/subtractive approach. Additive is service function (the central stair/storage element) and subtractive are the moments of respite (screened porches and decks). Surprisingly, while these are not large buildings (1,600 sf of air-conditioned space and 1,000 sf of exterior space), they accommodate much more than one would expect.

It must be Twin Peaks month:-)

A house tour by Adrienne Breaux. Fantastic article and she took a bunch of pictures, there’s a pretty comprehensive slideshow.

Wow, it’s SO great to see a good picture of that table. MJ can design furniture like nobody’s business. I keep wishing we had the time to start that line of furniture that’s waiting in the side lines:-). All in due time, I guess!

AT is a great site and it’s just wonderful to see the house posted there but it’s even more wonderful to see Kim and Paul enjoy and appreciate the house. We worked so hard on those houses, all of us, for over two years. We fended so much criticism, I have pages of emails of neighbors either loving them or hating them, there sure was no middle place, until… they came inside, most people fell in love with the places during the open houses, attracted by the sustainability, the light, the warmth of the materials and color, and our own love, I guess, it must’ve come through somehow… So, when Kim and Paul seem so happy there, it actually means something to us, I’m not just saying  this, we really worked so much in these homes that they are literally a part of us. Kim and Paul’s was the first in Bouldin, too… buf, I’m getting teary eyed… bleagh.

Amy Lemen wrote a wonderful article in this month’s issue of The Good Life Magazine.

And this reminds me of the .Inc article on the “other twin”, just to balance matters. That’s a pretty wonderful article too.

If you happen to read these two articles you’ll get a pretty good idea of what’s like to live in the houses that come out of the studio.

And… if you happen to be wondering what it’s like to work with an architect, us for example, I’d recommend you read these two articles:

And the sweet account from years ago, when I met MJ and he was working on Ron and Gina’s Lake house.

It makes me think of how much I’ve learned in these thirteen years, I’m grateful and lucky to be able to do what we do.  We create beauty for a living, what else can you ask for?

As y’all know and have heard to death, at least from our end, we were awarded a National Institute Honor Design Award this year for the Anthony Nak Jewelry Flagship Store by the American Institute of Architects

Ok, so we went to Boston and picked up the thing.

We were the only Texans at the design awards, but MJ made sure he was wearing his boots.

This project has won almost every award I can think of so, although the National was a surprise, it didn’t surprise me as much as you’d think… Nevertheless, out of curiosity, I went and researched a bit to see how rare this really was for Austin and wow, as far as I could find here, or here there have only been three other projects in Austin, TX ever awarded a national AIA award… it’s really kinda freaky, actually, they are:

– Pi Kappa Alpha Fraternity House by Lundgren and Maurer in 1954.  (We think it was demolished, can anyone confirm?)
– The Oaks by R. Gommel Roessner in 1965. (Sadly demolished when the University acquired a vast tract of land east of Memorial Stadium. This guy’s work would be interesting to see, anyone wants to go with me to these archives and see what’s there?)

That is not a lot of projects for a whole CITY, F-O-U-R??? It just doesn’t sound right to me… C’mon guys the work in Austin is GOOD, I’m I missing something? Texas architects in general fared a tad better, but besides Lake Flato, not so well, actually…

MJ still can’t believe it, but it’s real, I got in on camera! Slide show to follow, surprise, surprise!

Boston is now officially one of my favorite US cities, and they do have the best fish!!! We had lobster at the no name restaurant one rainy night after enjoying an afternoon at the ICA.

The most wonderful thing about Boston was seeing Reese Schroeder, one of mj’s oldest and best friends. In the slide show you’ll see us at the opening of the Apple store where strangely and appropriately, we ended up celebrating the win after a dinner at Aquitaine that knocked our socks off. We enjoyed the Metropolis as well, and manager Tim is just too cute!

On the slide show, you’ll find also some pics of the only Corbu building in the USA at Harvard and the Office da’s McAllen building (worth the walk.) plus some bonus material!

We stayed at the Clarendon Square and I HIGHLY recommend the place, quiet, flawless, beautiful, comfortable, it’s all that and more!

On with the show!

(most pics by Viviane Vives (Who doesn’t mind shooting for hire email vvvATbarcelonafilmsDOTcom) some by MJ Neal, AIA and some by Reese Schroeder, AIA. All rights reserved)

Vodpod videos no longer available. from picasaweb.google.com posted with vodpod

Publications and Films we’re in